A Llama Drama: Catching loose livestock might be easier in the age of social media, but the thrill of the chase remains 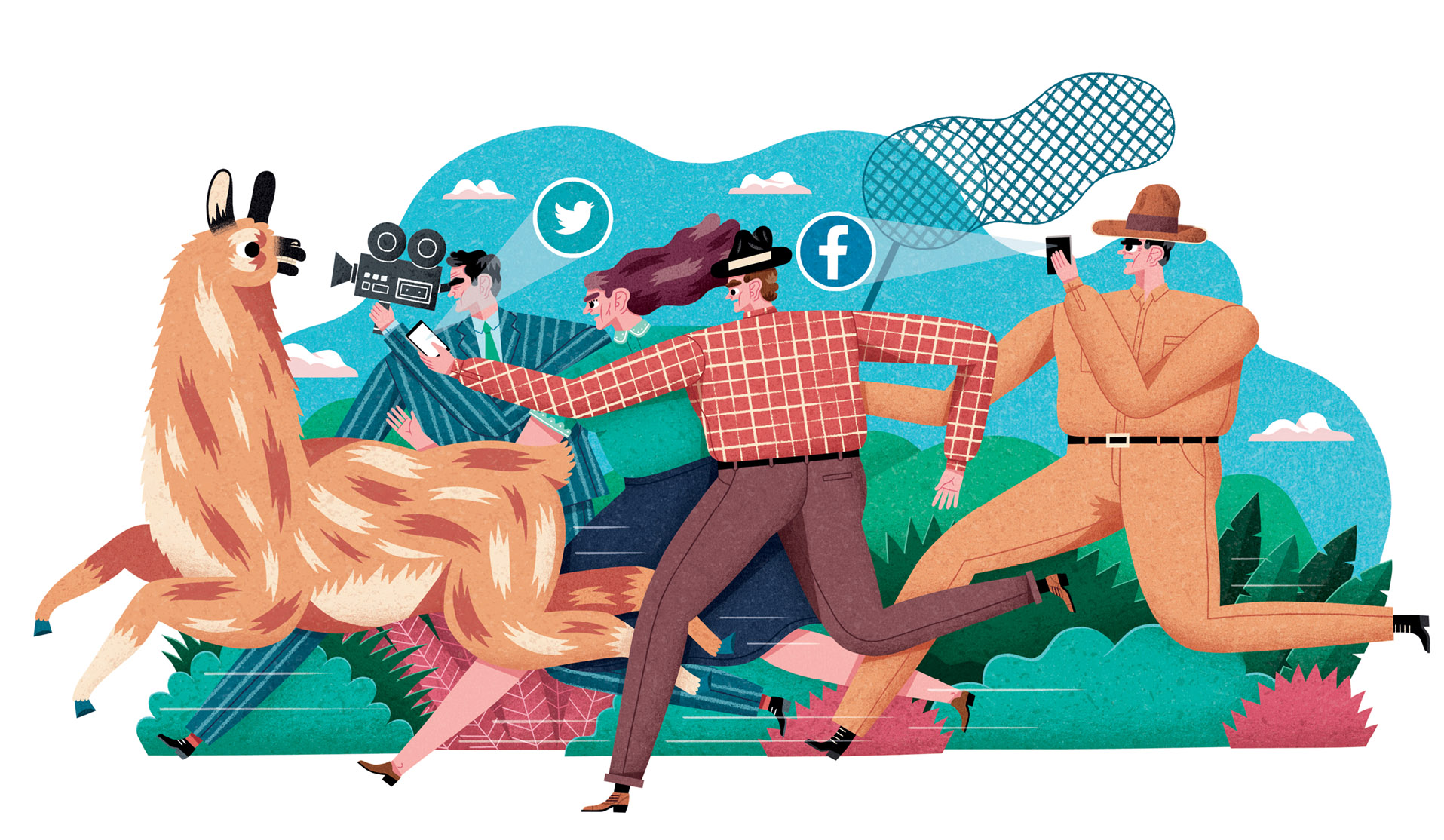 Growing up on a farm in rural Arden, south of Asheville, I was accustomed to grueling interactions with livestock. Every few months, our weekends were devoted to corralling about 60 head of Polled Hereford cattle for immunizations, castrations, artificial inseminations, and such. I’ll spare the details.

From time to time, some of those lumbering livestock would break their bonds and escape through a downed fence or open gate. Thirty years later, a lot has changed, but such breakouts still happen, as I was recently reminded after returning to live on my family’s land in Arden.

One Saturday morning last summer, our intrepid sheep dog awoke my wife and I as she barked through the glass front door. Looking through it, we saw the object of her objection: a llama almost as tall as us,staring vainly at his reflection in the glass.

Such a sight might perplex most folks, but not me, because I’d spent more than a few weekends growing up in the pursuit of errant animals. Sometimes, it was our neighbors’ cows or horses that got out.Sometimes, it was ours. In either case, everyone dropped what they were doing and steered the animals back to their penned enclaves. It was an unplanned and largely dull chore, to be sure, but it came with a spirit of mission, of neighbors taking care of each other—a kind of impromptu barn raising.

As a young teenager, for me it was also an exercise in addressing perplexing questions: “What would possess a cow to leave its pampered, grass-filled life in the meadow to amble up a rock- and tree-strewn mountainside?” And, “How has it come to this, that I’m spending my Sunday in a slow-motion roundup, hollering exhortations at brutish beasts that don’t understand a word I’m saying?” No one tells you about this part of being a cowboy.

At any rate, at the start of my first llama chase, I had a hunch about what was to follow. So I cleared my afternoon schedule and laced up my running shoes.

First things first, I reasoned: Whose llama was this? This creature’s natural habitat is the Andes mountains in South America, but it seemed unlikely that our specimen hailed from that far away. Still, I knew of no neighbors with llamas, so I deployed a new weapon in the fight against fugitive livestock: social media. On Twitter and Facebook, I posted a picture of the critter with this: “If anyone is missing a llama in Arden, it is at our house. Please spread the word.”

With that, I asked my wife to call the county’s animal control office to sound an escaped-llama alert and took off running. The llama was sauntering off at a slow jog, about my top speed. It let me get within about 20 yards or so, time and again, but persistently resisted my coos, clucking sounds, and even a bucket of dog food. One part of me thought, “Well, this should prove interesting.” My teenage self responded, “Here we go again.”

Two animal officers from the county were quick to respond. They had their expertise, better animal feed, and some ropes and snares that could have proved helpful. But none of it did, and I was chagrined to learn that they weren’t packing tranquilizer guns.

After about an hour of the increasingly farcical chase came a breakthrough: Some Facebook users recognized the creature and connected me with the owners. They lived a couple of miles away, and didn’t seem entirely surprised that the llama had jumped the fence. Not surprised, but definitely not pleased.

Soon, several of the owners’ family members joined the hunt, which seemed to grow more futile by the minute. Phantom, as I learned he was called, lived up to his name and exhibited the llamas’ trademark endurance, deftly navigating through our lines and seeking higher ground. Then, Phantom made his biggest move yet: He breached the grounds of a gated community, The Cliffs at Walnut Cove, and darted mockingly around the Jack Nicholas-designed golf course. “What the hell?” a few golfers muttered as our swelling posse ran madcap around the links.

Just when things couldn’t get any weirder, the Asheville Citizen-Times’ resident wiseacre, John Boyle, showed up to document the affair (must have been a slow news day). “We’ve got a llama on the lam,” I told him, with all the seriousness I could muster.

Two hours later, it was all over. We didn’t catch Phantom, nature did: He was stuck in brush on a ridge surrounded by the Cliffs’ mansions, and his winded and sweaty owner finally affixed a leash to his harness.

It might have ended there, were it not for an inadvertent social media surge. To begin with, USA Today decided to run with the story, and my Twitter missive to find Phantom went viral, drawing the attention of tens of thousands in not only the United States but around the world, especially in Australia and England for some reason. I’m a journalist by trade, and I’m not proud of the fact that the one story of mine that’s gone global concerned a happenstance llama drama.

For weeks, I continued to get queries about Phantom’s fate: Was he alright? Did he find his way home? I’ve seen AMBER Alerts about missing children that have generated less public interest.

For a while, I responded, assuring correspondents that the elusive Phantom was back where he belonged. But at some point, I made a conscious decision to reply no more, to leave the llama’s story open-ended. On Twitter, at least, Phantom can still run free.