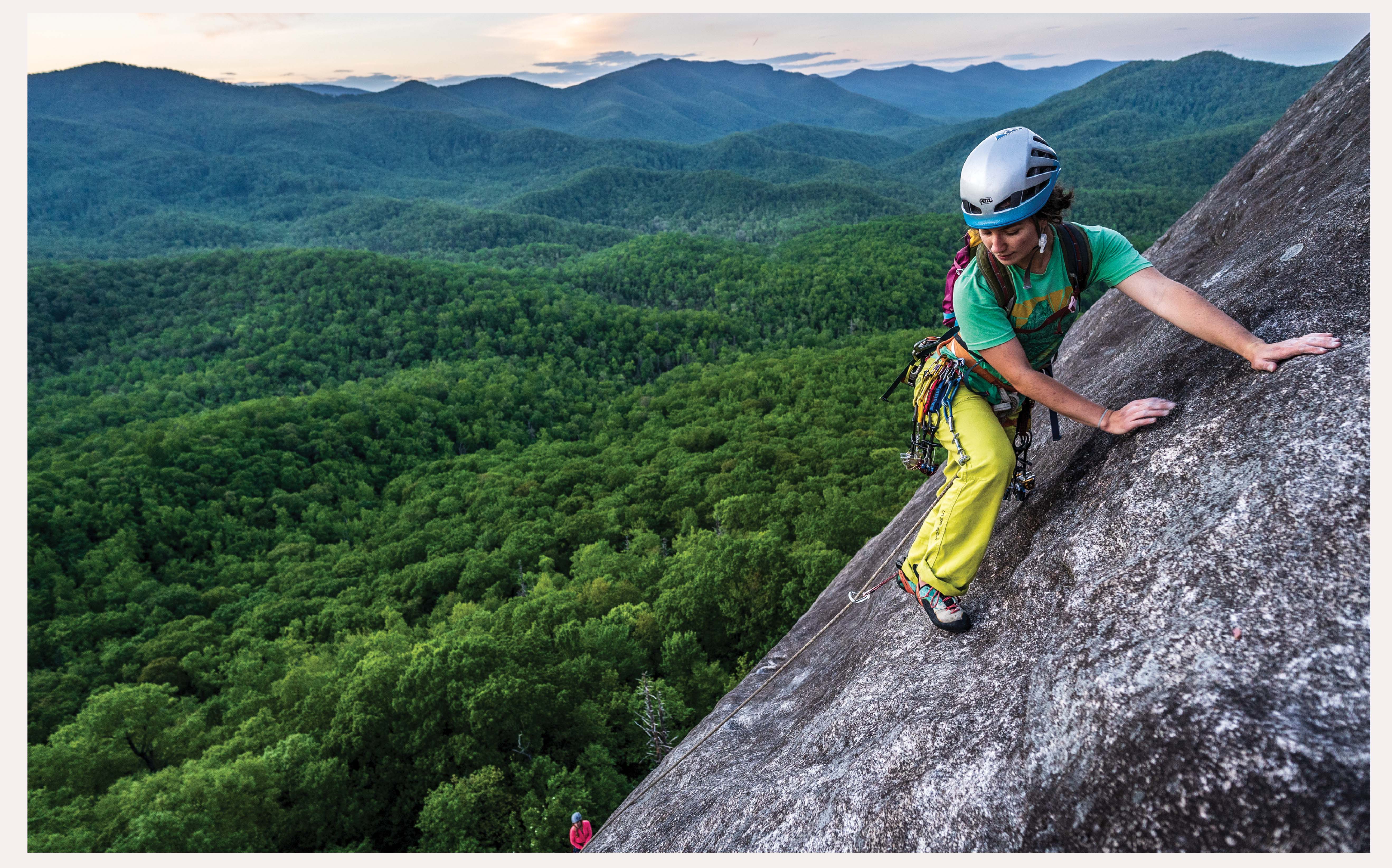 Anna Marie Alewine relies on the grip on her shoes against sloping granite as she makes her way up The Nose route on Looking Glass Rock, one of the Southeast’s most iconic climbs.

North Carolina’s most popular rock climbing route isn’t necessarily known for its difficulty or size. What sets it apart is the way it came to be: a first ascent marked by a tale of adventure, boldness, and ingenuity. In fact, the Nose on Looking Glass Rock in Pisgah National Forest embodies the very substance of North Carolina’s climbing tradition and is a perfect introduction to climbing, North Carolina-style: bold, exposed, and exciting.

Several decades ago, my first time up the granite dome of Looking Glass Rock was a clear night during a full moon. The adventure had the feel of a first ascent, but hardly it was. The pioneering climb of the mammoth dome, in fact, was accomplished by a trio of bold men—Steve Longenecker, Bob Watts, and Bob Gillespie—on a chilly December day in 1966, with snow still on portions of the face. Their route was among the first multi-pitch climbs of the era in which the partners used improvised gear, clunky hiking boots supported by nylon twisted rope, and makeshift harnesses.

By now, the route has been scaled, perhaps, by more climbers than any other in the state. In fact, on a clear day from the Blue Ridge Parkway, it’s possible to visually distinguish a path worn through lichen up a diagonal ramp on the mountain’s prow. Looking Glass itself is an aged mass of hardened lava and resembles an enormous forehead bulging from the forest, its timbered hairline receding. The moderately challenging climb moves over a sea of “eyebrows”—a strange and inexplicable feature of the mountain in which you can fit a foot or hand as if climbing a clandestine ladder. The original route climbs four pitches, each roughly less than a rope length.

Since the trio’s pioneering climb, rock-climbing gear has become much more sophisticated, and the considerable span of exposed granite is within the ability of greenhorns, too, in spite of a few delicate steps up the route and some hair-raising exposure. However, your first move is to find a certified climbing guide. They’ll furnish the gear and expertise to support your safe ascent. Your only prerequisite is a bit of grit, focus, and determination. While many thousands have made it to the apex of the climb, you’ll recognize that the achievement of the trio of pioneers in 1966, and your own, is indisputable.

(Left, top) Steve Longenecker, 1966; (Left, bottom) Bob Gillespie, Nose ascent, 1966;  Looking Glass Rock is an ancient pluton monolith that rises some 4,000 feet from the valley floor in Pisgah National Forest. Its name is derived from the glassy appearance when rainwater freezes on the surface.

The Nose is rated as 5.8 on the Yosemite Decimal System. In climbing terms, that means it’s considered moderately challenging. However, ratings are based on a range of factors, including experience level, level of fitness, and the type of climbing. The Nose has a few tricky moves on the way up, and getting used to climbing on a relative low angle slab may be new to climbers from other states. Slab climbing emphasizes balance over brawn.

The route is a multi-pitch climb, which involves stops at ledges (or belay stations) since The Nose is longer than a rope length. The entire four-pitch route is roughly 400 feet. The third pitch is the “crux” of the climb and has the most exciting moves. In order to climb safely, someone in your party should be a skilled lead climber. A certified climbing guide, however, can take you up the route and eliminate any risk of a fall. With a guide, your job isn’t to worry about the safety system, so you can just focus on the thrill of climbing. 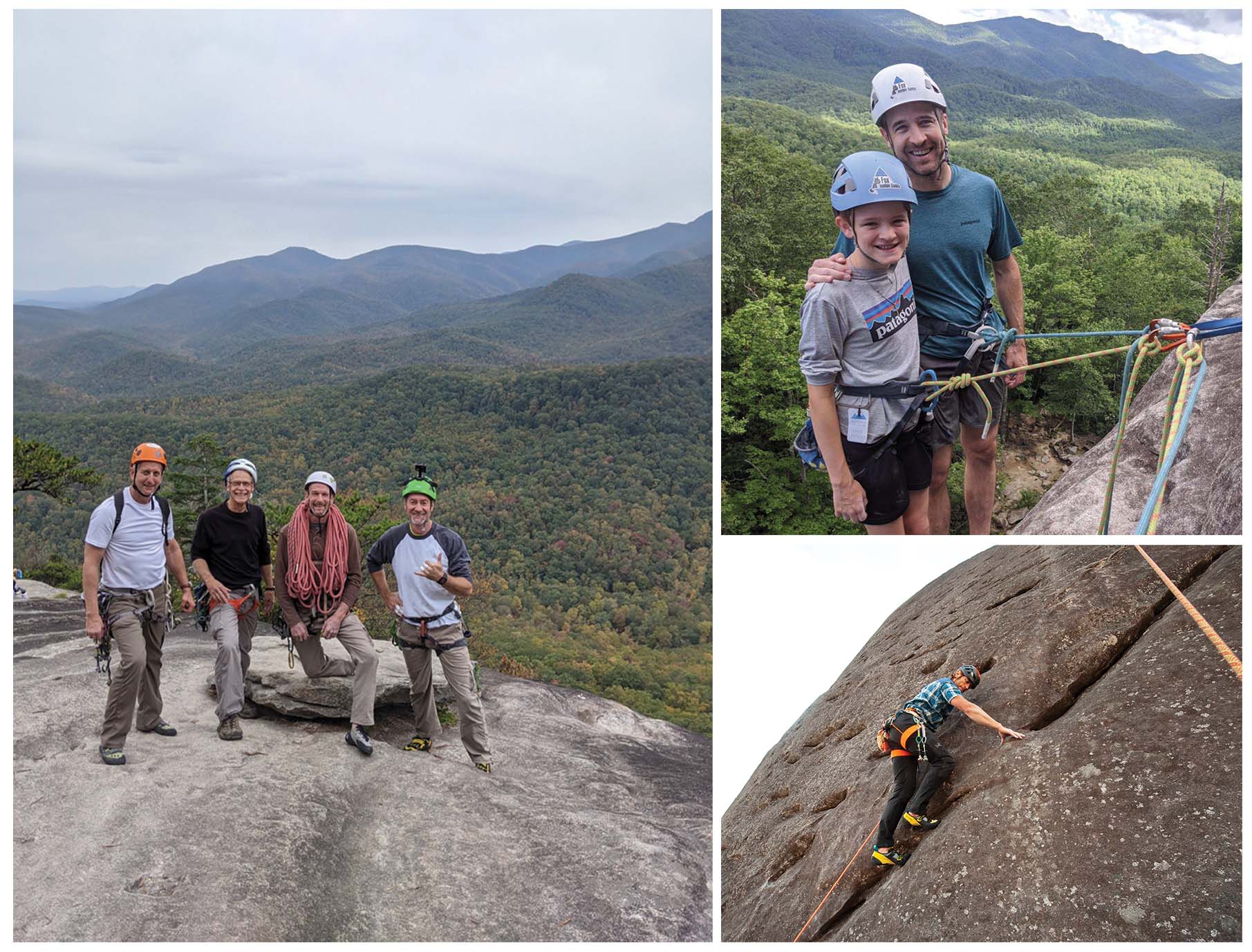 (Clockwise from left) A group out with Fox Mountain Guides pauses for a celebratory snapshot at the top of Looking Glass before rappelling down; With a guide, a climb on Looking Glass is accessible to beginners and kids; Like most rocky routes in WNC, The Nose offers friction (aka slab) climbing, which requires using your palm to grip slanting features and trusting the rubber on your climbing shoes to get you up the rock. (Pictured) guide Peter Dickson with Pisgah Climbing

There are plenty of professional climbing guides in the area. Whomever you select, look for a certification from the American Mountain Guides Association. Each guide will provide safety gear and let you know what to bring. Here are three services to consider: